Devs Were Made to Code: Low-Code Development in a High-Control World

When it comes to flexibility and customization in creating business applications, traditional hand written coding is still the most powerful option in the market today. However, the power of traditional coding comes at a cost of complexity, time and resources. In fact, low-code spawned out of the need to create applications faster than traditional coding could provide. Low-code refers to a development platform which uses a graphical, model-based approach inside an Integrated Development Environment (IDE) to create applications with little to no traditional coding. While the concept of low-code remains constant across all low-code platforms, the approach is quite different. At one end of the spectrum you have no-code solutions where developers create applications using zero written code. This method is based around dragging and dropping controls inside the IDE. On the other end, you have Visual LANSA, which offers the ability to write code inside its IDE but dial back the drag and drop features.

With so many options to create your business applications, it can get a little overwhelming trying to find the best solution. A great guide breaking down each coding method can be found here. I highly recommend checking it out if you still have some concerns of when to use no-code, low-code or traditional coding. For now, you just need to know the difference between model-based (using a drag and drop interface) and language-based (the ability to write code in the interface) low-code platforms. Despite all the low-code options available for creating applications, being able to write code inside the low-code’s platform IDE is probably the most effective and efficient method to creating enterprise applications. Let me quickly explain why being able to write code in a low-code IDE is so powerful.

The biggest issue with model-based low-code platforms is that you have to leave the platform’s IDE anytime a problem can’t be solved by the platform’s provided features. If there isn’t a drag-and-drop option available for what you are trying to solve, a workaround has to be created in another programming language outside the platform’s IDE. Complex process logic and custom or uncommon integrations are two of the biggest problems for model-based low-code platforms. However, these two issues are a staple of any enterprise application. The application usually has to connect to legacy systems, pre-built software packages, or custom applications. Using a model-based low-code platform, a developer would have to leave the low-code IDE, create a workaround in another language and then create a connector so the low-code application could consume the workaround. Not only do you lose time by having to leave one IDE and enter another, you now have multiple sources to maintain and update. Troubleshooting becomes more complex and time consuming and an update to either the workaround or low-code platform could break the entire application. On top of this, developers still need to be experts in several programming languages as one language or platform can’t solve every problem.

Low-code 2020: On the Verge of Domination

As product marketing manager, Tony draws on his experience as a former Information Systems Manager where he was responsible for developing enterprise applications. His broad range of experience includes leading a digital transformation initiative that included rewriting a custom legacy ERP system using the Visual LANSA low-code platform. Tony also specializes in software integration and has created custom data collection software for the manufacturing industry.

Common Mistakes Of AS400 Automation

The Evolution of Analytics And Reporting Tools 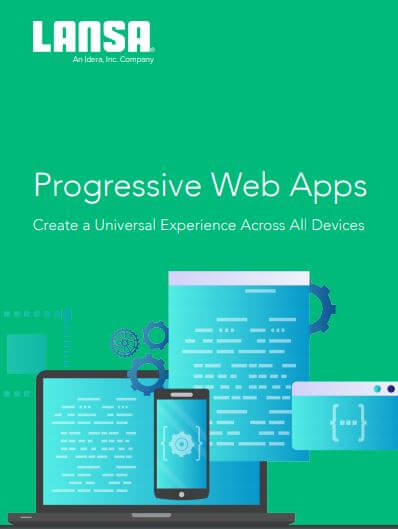