The ASA Client/Server database is selected as a default for the following install types:

If more than one Slave Server exists on the same domain and the default server name of LX_LANSA is not changed, then subsequent installs on other PCs will fail to create the database because duplicate Server names cannot run simultaneously on the same domain.

If each PC is installed individually and shut down straight after the install, then you will not see any errors until more than one PC tries to start up at the same time.

There are 2 simple solutions that will prevent this scenario from occurring:

In both of these cases the resulting DBMS Selection screen should look like this: 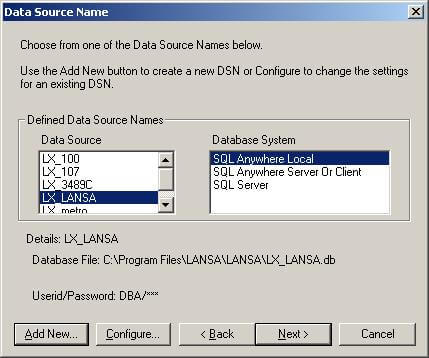 The default for the Typical Install options will be changed in the next full release of the Visual LANSA Software.