Microsoft Attachment Manager blocks files that have crossed the internet

If you receive software in a zip file it may have crossed the internet at some stage in its journey to you (eg: e-mail, FTP, etc). This means the zip file may be marked by the Microsoft Attachment Manager as blocked.

You can check if a file is blocked by displaying its properties like this:

If you see the indicated message then the file is marked as blocked.

You should always unblock a zip file that you intend to install from before unzipping it - no matter how you got the zip file.

If you do not do this, every file you unzip from the zip file may also be marked as blocked.

If the unzipped files are marked as blocked they may cause you hard-to-find problems later.

You will probably have to unblock them individually.

If you want more details ….

How does it affect your files

If you download a file from the Internet, that file will be marked as unsafe until you unblock it. When a file is marked as unsafe, Windows might not allow you to open this file, however the exact behaviour depends on the type of the file. This is somehow confusing and might lead to hard-to-find and obscure problems later on. It is therefore necessary to always unblock any file that you trust to avoid any unnecessary problems.

Downloading a ZIP file from the Internet

How to unblock files downloaded from the Internet

You can check if a file is marked as unsafe from the properties screen (Windows Explorer, right-click, choose Properties). 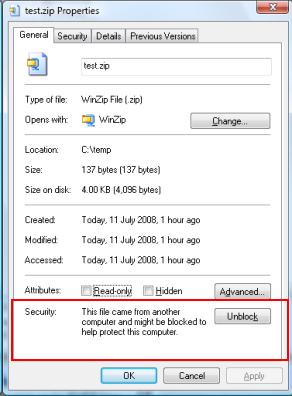 Click on the 'Unblock' button to tell Windows to remove the 'unsafe' marker.

FAT/FAT32 volumes are not affected.

Attachment Manager is unable to mark files that are stored on FAT/FAT32 volumes. Only NTFS volumes are affected.

How to 'unblock' multiple files easily

The simplest way to 'unblock' multiple files is by copying the files to a FAT/FAT32 volumes and back to your NTFS volume. An alternative would be to use a small tool that you can download from https://docs.microsoft.com/en-us/sysinternals/downloads/streams

The Attachment Manager can be disabled.

The steps to do that are outlined below: