When using jQuery Weblets, a WAM must include the relevant jQuery CSS (Cascading Style Sheets) to display correctly. The new default layout Weblet and themes in V12 SP1 include the required CSS without any additional steps, but for existing WAMs, or WAMs using layouts created before SP1, additional steps are required

Furthermore, VLF WAMs (including those built in SP1) use the vlf_layout stylesheet by default, which includes it's own CSS and no obvious method for including the required theme CSS. Fortunately, with SP1 and External Resources, adding the required CSS files is now very easy.

For existing WAMs, or WAMs using a pre-SP1 layout weblet

Open the layout Weblet for your Webroutine and, select Manage External Resources under the Web menu. In the resulting dialog, select Add, and then include the jQuery UI Widgets and LANSA Theme Extensions from your desired theme: 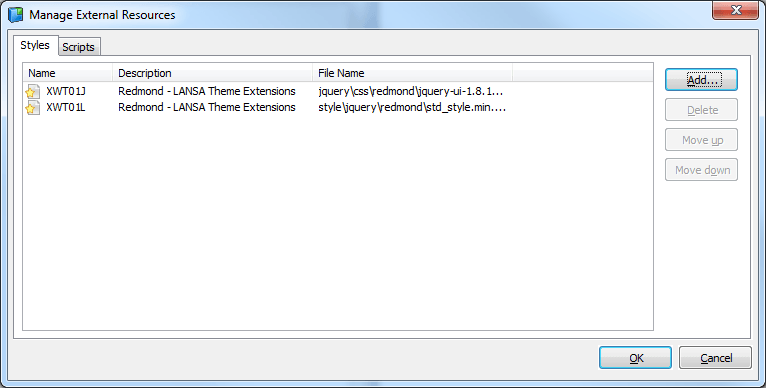 Note that by adding these CSS files, certain elements of your WAM may change in appearance. Messages Weblet will be themed, and you should make sure that the CSS does not conflict with any additional CSS you are using in your WAM.

jQuery Weblet appearance will depend on the jQuery theme you selected, so you might want to experiment to see which one fits your existing layout best, by adding and removing the CSS files in this dialog.

This can be achieved by one of 2 methods:

From there, you would add the relevant jQuery UI theme CSS as per regular WAMs, however this will be done in the WAM/Webroutine level, instead of in the layout Weblet (it is not recommended that you modify the shipped vlf_layout_v2 layout Weblet).