A VCS Master is a Version Control System of your choice. It is only required to be able to store and retrieve text files.

Security and Task Tracking are disabled and are replaced by the VCS method of controlling access to LANSA objects. 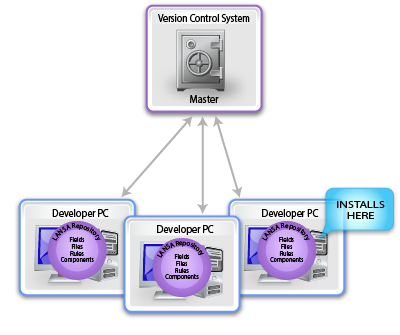 In this scenario, the developer’s PC has a complete development environment installed which is not connected to either a Windows or an IBM i system but is configured to use a VCS (Version Control System). They can develop and test any type of application on their PC without being connected to the VCS Master System.

When they complete a unit of work they check in the new or changed objects to the VCS Master Repository. One of the Independent Windows Workstations will be designated as the Build Machine and the Deployment Tool will be used to move or export LANSA applications to Windows or the Deliver To facility will be used to move LANSA applications to IBM i or Linux on the designated Build Machine.

It is assumed that a VCS has already been configured and in use prior to setting up a LANSA development environment using the VCS as the LANSA Master Repository.

When you have configured your development environment and you have verified the installation as described in the instructions, you are ready to populate the LANSA development environment from the VCS Master. This environment may be compared to the Visual Studio development paradigm. Visual LANSA will be editing text files that have been checked out from the VCS or will be creating them to be put in to the VCS Master. The Repository is still used to contain the LANSA objects, but they are now reflected into a directory of which the VCS also has a view.