Although AS400 software was developed at the end of the last century, it is still popular and frequently used today. In this article, we will look at what AS400 is, what are the benefits of using it, its scope, and also what alternative names exist. We will also explain how to upgrade an older IBM green screen.

AS400 (Application System/400) is a mid-range server. IBM released it in 1988 for small, medium, and large web and mobile applications. It became popular due to the wide range of functionality it provides. AS400 is a highly secure, stable, reliable, and scalable system.

The IBM AS400 uses a technology-independent machine interface (TIMI) and a platform-independent instruction set architecture (ISA) that compiles with machine language instructions. This allows it to use a 64-bit processor without breaking application compatibility.

IBM has rebranded AS400 several times. In 2008, the final rebranding took place, after which it became known as IBM Power Systems.

What Is The AS400 Operating System (iSeries)?

The AS400 operating system is one of the most popular and widely used operating systems. Although the processors running the AS400 have changed many times, it is compatible with software that was developed back in the 1980s on older hardware.

OS/400 has single-level storage. It allows you to quickly switch from one task to another by using hierarchical storage management to move the most frequently used content to the fastest memory in single-tier storage.

An interesting feature of the OS/400 is that it has a built-in database that it uses for many of its own storage requirements.

AS400 operating system can work effectively for a long time without operational support and a database administrator.

Programmers often use the OS/400 to develop highly available and accurate systems that are economical and easy to operate. For example, warehouse management, inventory control, order processing, banking, and insurance applications.

What Is The Difference Between IBM I And AS400?

AS400 is hardware, and IBM i is software, so it is not correct to compare them.

Mainframes And IBM I (AS/400) Systems: What’s The Difference?

There are many differences between mainframes and IBM i (AS/400) systems. Instruction set and underlying hardware, scalability, user interface, general architecture, etc. But the main difference is that IBM i is a mid-range server and the mainframe is a high-end server. A mid-range server is a more affordable but less powerful option than a high-end server such as a mainframe.

Another difference is that the mid-tier server is a stand-alone system, while the mainframe is a distributed network of components that interact to form a massive computing platform. Companies use a high-performance server to store large amounts of data and run centralization applications. It is distinguished by reliability and safety.

Is IBM AS/400 Software Extinct?

IBM released AS/400 in 1988, which is why many people consider it obsolete. However, it is not. The IBM AS/400 system is constantly evolving and using modern technologies. Many of the world’s leading companies are now using it for mission-critical applications. This system provides scalability, security, reliability, and flexibility. AS/400 powers ERP systems, and applications for hospitals, banks, government agencies, and more.

Let’s list some of the most common reasons why the AS/400 is still popular and frequently used in various business areas.

As we said above, the AS400 system constantly improves and provides the functionality that today’s business requires. Among them are the following:

An important advantage of the IBM AS/400 system is the powerful processors, which are three to five times the power of comparable systems. Therefore, this system is indispensable in applications that require high productivity.

If a company has used an AS/400 system in the past, switching to another system can be costly, disrupt performance, and disrupt other processes. This is an important reason why companies prefer not to change the system.

Are There Upgrades For AS400 iSeries And IBM I Systems?

The AS400 iSeries and IBM i systems constantly update. They include improvements to the processor, memory, disk drive, solid-state drive, and other features to keep up with today’s business functions. We can customize and upgrade AS400 systems to suit our needs.

How To Modernize AS400 With LANSA?

LANSA is a popular solution for modernizing IBM i applications. It provides various tools that make it easy to optimize the application development process, upgrade existing applications, and add new features.

AXes by LANSA is a tool that allows you to easily and quickly create modern user interfaces and web applications instead of the older IBM green screens. All you need to do is use aXes with your IBM i and your employees can securely access their IBM i 5250 applications from any remote device with Internet access.

The AS400 is a line of computers with its own OS/400 operating system and an embedded database. IBM created it for small and medium-sized organizations.

We can use the AS/400 as a good repository for big data. It can perform tasks such as warehouse management, order management, sales, and more.

iSeries is a server that belongs to the AS400 line of computers. IBM released it in 2000 and built on a POWER4 processor instead of the RS64 processors used in previous generations.

The AS400 software is a system created for small and medium businesses. It constantly updates and provides the necessary functionality for businesses. IBM first renamed AS400 as iSeries and then – as System i. The latest version of this system is known as IBM Power Systems.

Companies widely use AS400 in various industries. The most popular applications that use this system are listed below.

What is AS400 software used for?

We can use the AS400 software to develop any application. However, it is most relevant for industries with high data processing requirements, such as manufacturing, finance, applications for creating and processing orders, etc.

Ready to modernize your AS400 software?

Install a free trial version of aXes by LANSA and use it to modernize AS400 software.

There is a popular opinion that the AS400 system...

In this world, there are two kinds of... 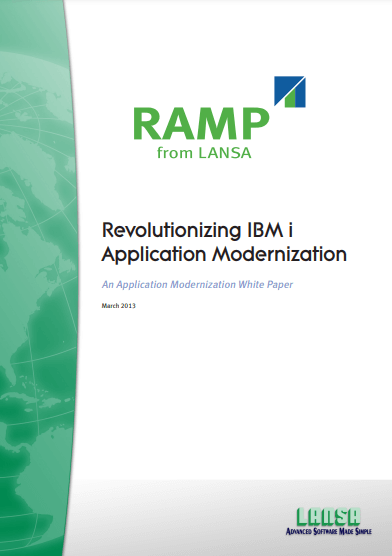